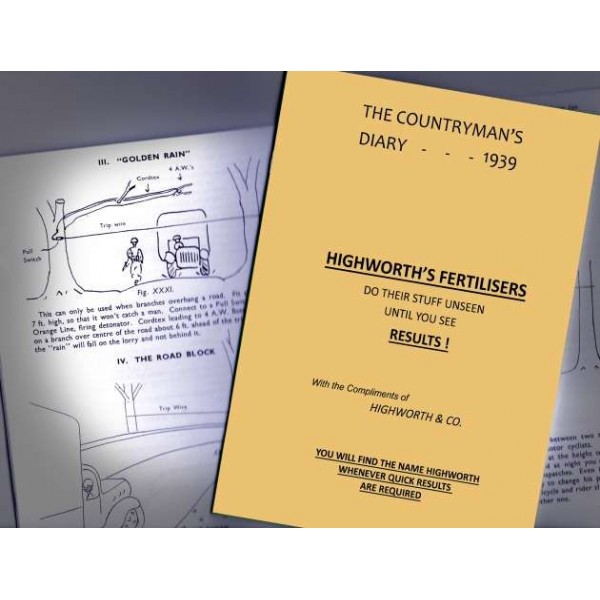 This fascinating training booklet was a direct development of the Calendar 1937 and Calendar 1938 – as a brief comparison of the respective contents will confirm.

The contents of the Countryman’s Diary remained much the same of Calendar 1938, including the ‘L’ (Lead) delay, and advanced version of the Time Pencils which, instead of acid, relied upon a spring-loaded lead wire. When broken, it fired the attached detonator. The main changes were in the exclusion of the “Sticky Bomb” and the highly dangerous AP switch; and the inclusion of the “Fire Pot” – a magnesium incendiary which, once lit, was almost impossible to extinguish – and the Pocket Time Incendiary (PTI). Both were issued exclusively to Aux Units. The reduction of weight of the unit charge – the standard explosive weapon used operational patrols since the middle of 1942 – provides further indication that this booklet was the last in the evolutionary line of “Calendar” training manuals, as the new half pound charge also features in Major Oxenden’s “Final Teaching”.

It was issued as a 42-page booklet, put together by a captain in the RE and which contained all the reminders that a well trained saboteur would need in practice. As a doubtful concession to security, it was given a cover title which would not look out of place on any farmer's bookshelf, The Countryman's Diary - 1939.

It was humorously issued "With the Compliments of Highworth and Co" and stated that "Highworth Fertilisers do their stuff unseen, until you see results!" This could well have become the operational motto of the three Auxiliary Unit Battalions! As well as giving details on the packaging, characteristics and methods of use of the various explosives and equipment, the handbook contained many useful hints and tips, including the "dos and don'ts" of handling explosives. A chapter was included on the best methods of attacking certain targets, and how to calculate the amount of explosives required, followed by the admonition that "if in doubt, double the calculated charge!"

Sketched drawings indicated how to destroy railway lines, petrol dumps and stores, and where to place charges to do the most damage to parked aeroplanes or vehicles.

Advice was also given on how to make improvised mines. 'Aim at killing by splinters, not by blast!' The use of an old motorcycle cylinder was highly recommended - 'The fins fly well!'

Apart from the standard government caution relating to the disclosure of information to unauthorised persons printed on the fly-leaf, there was no indication for whom this publication was intended, although one give-away missed censorship, for, when warning that some gelignite could deteriorate under damp storage conditions, the author stated that "Auxunit packing is OK".

This is a brand new 42 page rare reproduction A5 size. One page has a tiny part of the text missing at the top but it is only about 1 line. The colour of the cover may vary from yellow to cream. Now an extra loose leaf page is added showing the surprising distribution dates.

NOTE: the three "Calendar" training manuals are available in a special bundle of 3, and also in a bundle of 5 along with the The Art of Guerrilla Warfare Handbook and The Partisan Leader's Handbook.